The area of modern Slovenia was already inhabited during the prehistoric age. At this time, Neanderthals first, and homo sapiens later, occupied the caves. many interesting findings were made in these caves in recent times, to mention just one – the Divje Babe Flute – a pierced cave bear bone, that scientists believe to be the oldest instrument preserved in the world, being around 45000 years old.

The next inhabitants of our land were the so-called “Pile dwellers”, who built their wooden houses above the lakes and marshy lands, protecting themselves from wild animals and other tribes. They were mostly living in the area south of Ljubljana called the Ljubljana Marshes, now a Unesco world heritage site. The oldest wooden wheel is also from this period, around 5200 years ago.

For most of the Iron Age our land was populated by Celtic and Illyrian tribes. They had their own language and culture until the 1st century BC, when the Romans arrived and they either assimilated their culture, or moved to higher grounds.

The romans brought technological advancement, building roads, aqueducts, and modern towns, Emona (Ljubljana), Celeia (Celje) and Poetovio (Ptuj) being the most important ones. Their remains can still be seen, especially in Ljubljana, where the outer walls of Emona are well preserved. On Slovenian soil happened one of the most important battles of the Roman era – the Battle of the Frigidus. It happened in 394 AD and was fought between the Western Roman ruler Eugenius and the Eastern Emperor Theodosius I. They both had a big army of around 50,000 soldiers and suffered heavy casualties, but in the end the Eastern Emperor was the winner. This battle was the end of the Roman polytheism of the Western Roman empire. It was a big victory for the Christian religion, which is still practiced in most of Europe today. As the roman empire started to fall apart, from internal conflicts and pressure from barbaric tribes, it pulled out from our land.

Until the 7th century our land was crossed by many tribes (Lombards, Ostrogoths, Huns), but none of them remained here permanently. 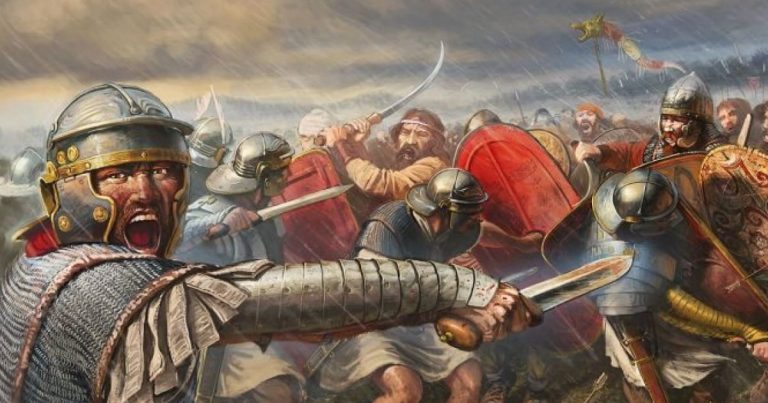 Slavs came to our land at the end of the 6th century from two directions: from the area of today’s Morava and from the Slavonia, helped by the Avars. Even though in beginning the slavs were submitted to the Avars, they soon gained independence and started establishing entities like Samo’s Empire, Carantania and Carinthia. Many believe that Carantania is the predecessor of modern Slovenia. Slavs brought to the area their own polytheistic religion, and some of its customs are still preserved today. In the 8th century the Christianization of the Slavs slowly took place. Of course, people tried to rebel against it, but they were silenced by the Germanic tribes that hold a strong power on our land. From the 11th to the 14th century Slovenia had been ruled by the Germanics, led by important families such as the Dukes of Spannheim, the Counts of Gorizia, the Counts of Celje and the Habsburgs. They ruled over the Slovenian land until the end of WWI, in 1918. 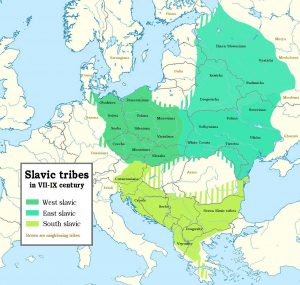 In 15th and 16th century Slovenia suffered constant attacks from the Turks, or Ottomans. They never occupied our land, but were raiding it frequently. This two hundred years were times of big regression; people were in constant alarm and ready to flee their homes at any moment. Churches on top of the hills were surrounded by walls, and were a place of relative safety during raids. People invented the so called “medieval telephone”, large bonfires on the top of the hills that were lit when intruders were noticed, letting people in the center of the country know of the approaching threat. Ottomans were plundering villages, raping women and kidnaping young Christian boys. They were taken back to their empire and trained as soldiers in the sultan’s army; a few decades later, they would be attacking their homeland without knowing it. They were called janissaries.

Between the 16th and the 18th century many peasants start rebelling because of the terrible conditions they were living in. Unfortunately, all the revolts were bloodily suppressed and not much changed.

For a few years (1809 – 1813) Slovenia was occupied by the French Napoleon army, that established the Illyrian Provinces, with capital Ljubljana. Even though this was a foreign occupation, it was much better than the conditions Slovenians were living under the Austrian empire. Practice of Slovenian language was allowed even in schools, and many progressive laws, that didn’t exist under the Austrians, were introduced. That’s why we are the only nation that built a statue in gratitude towards Napoleon. This statue still stands and it is possible to see it in Ljubljana. After Napoleon was defeated, we were under the Austrians again, but something had changed in people’s heads, as they tasted freedom and were striving for more.

Even though there were some internal struggles between different groups, they were all calling for the same thing: cultural and political autonomy. They organized mass rallies called TABORI: the most important one, in Vižmarje, counted around 30,000 people coming together. Because this rallies were strengthening Slovenian nationalism, they were soon prohibited by the Austrian president Hohenwart. Nonetheless, the idea of independence was growing stronger and stronger every year, and the idea of union of south Slavs, called Yugoslavia emerged.

The 19th and the 20th centuries were times of big migrations from Slovenia; because this is the most important aspect of Slovenian history for genealogy and ancestor research, it will be described in a separate article: Slovenian migration.

1914 was the start of World War I. One of the main fronts was in Slovenian territory – the Isonzo front or Soška fronta, in Slovenian. Around 1 million people died on the front or as consequence of it. Our famous poet Simon Gregorčič wrote in his poem “Soči” “in ti mi boš krvava tekla” translated: “and you will flow full of blood”. This was the biggest battle of all times in Slovenian territory and around 30,000 people lost their lives. Many more were resettled to other areas.

When the war was over the Austro-Hungarian Empire fell apart and soon the Kingdom of Serbs, Croats and Slovenes was created. It was the first time since the 10th century that we were under a Slavic leadership. Even though we were not independent, in this period economy and arts flourished. We were the most industrially developed part of the kingdom. In 1929 the kingdom of Serbs, Croats and Slovenes was renamed to kingdom of Yugoslavia. The constitution was abolished and the pressure was on the raise again; the grounds were ripe for the creation of radical groups, right and left alike. Left liberal, agrarian parties and Christian left worked together with the forbidden Communist party fighting against fascists.

World War II started on the 1st September 1939, and one and a half year later the territory of Slovenia was occupied by the Nazi Germany, Fascist Italy and Hungary, the territory split in areas controlled by these three countries. Ljubljana was surrounded by barbwire and was something like a city-camp. The total length was 32,5 km (20 miles). Today, where the barbwire was laid, is the walking path called Trail of Remembrance and Comradeship. Soon after the occupation the resistance was established to fight against the invaders. The nation liberation front was established, creating partisan groups all around the country. They were mostly fighting skirmish battles, sabotaging the convoys and destroying ammunition storages. Some Slovenians also collaborated with occupying powers and created the Slovene Home Guard, that later became part of the German army. Finally, in 1945, with the help of allies our land was liberated.

After the war, we became part of the Socialist Federal Republic of Yugoslavia, led by president Josip Broz Tito, usually just called Tito. At the begging, we cooperated with USSR, but the ties soon came apart in 1948. It is said that Stalin sent many assassins to eliminate Tito, but they were all caught; Tito wrote a letter to Stalin every time, asking him to spare the lives of these young boys as they will be all caught and killed.

Yugoslavia did not belong to any bloc, not eastern nor western and was prepared for invasion from both sides. Most of the older generations are nostalgic about the Yugoslavian era. They state that everyone had a job, a social security, health security, free education and even free holidays supplied by the employers. In Slovenia, workers mostly went to camp sites in Istria and mountain huts in Slovenian alps. Yugoslavia was also one of the countries that establish the union of nonaligned nations. The presidents of India, Indonesia, Ghana, Egypt and Yugoslavia created this movement in 1956 in Yugoslavia; the main idea was to connect the non-aligned countries and improve the relationships between them. The countries of the movement contained more than 55% of the total world population. In 1980, president Tito died, and the country was left in shock. The future was uncertain and soon the battle for power began. Many wanted to take control over the country. It was also the time when the voice for independence grew louder and louder. Slovenia amounted for less than 10% of Yugoslavian population, but was producing around 20% of the country GDP and around 25% of all exports.

Finally, on the 23rd December 1990, a referendum on the independence of Slovenia was held. More than 88% of Slovenians voted in favor, and on the 25th June 1991 independence was declared. From that moment onwards, for the first time after many years, we were able to draw our future; we became part of the European Union and NATO and, in 2007, adopted the Euro as our national currency.